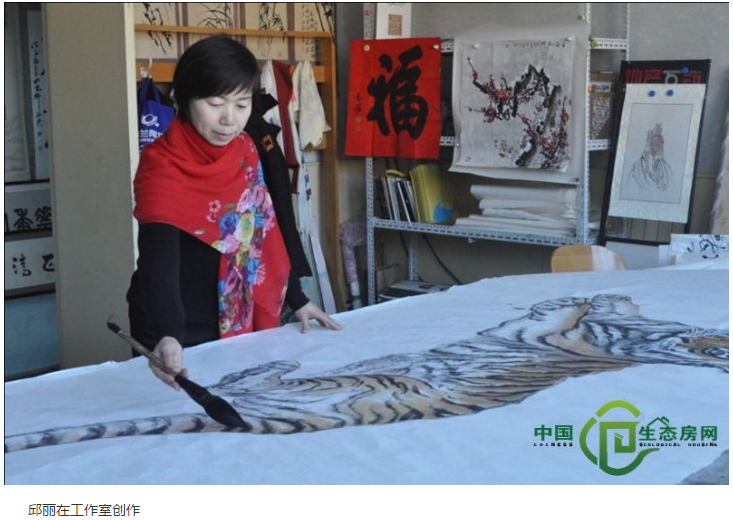 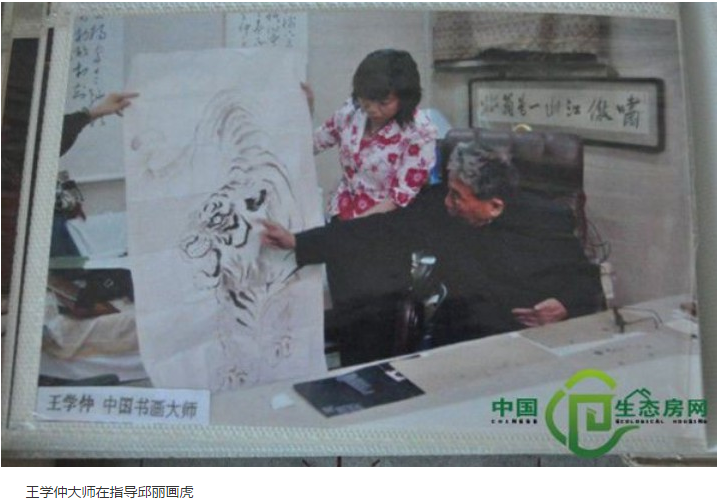 In 1963, Qiu Li was born into a teacher's family in Yichun, Lindu, China. Her mother was a painting teacher. She was deeply interested in Chinese painting and calligraphy since she was a child. After the third grade of primary school, his paintings were often taken to the class by art teachers to give comments to students. Later, he was admitted to the Fine Arts Department of Harbin Normal University and went to the Central Academy of fine arts, the highest Academy of Fine Arts in China.

It can be said that Qiu Li is a young painter who was enlightened by his family, received professional training in University, and received master zhenzhuan in Central Academy of fine arts. Her works always give people the shock and feeling of the lion and tiger, the beautiful lady, the fresh grapes and the charming peonies. 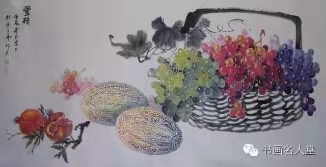 Many of his works have been collected by domestic and international friends, such as the United States, South Korea, Russia, Malaysia and so on. After seeing Qiu Li's works, a collector in Singapore said with emotion: Qiu Li is the number one among the contemporary female painters of lion and tiger in China.Qiu Li said that her achievements in traditional Chinese painting mainly benefited from her solid theoretical foundation and standardized training, the infiltration of traditional painting style and the guidance of famous masters, as well as her understanding of natural ecology and real life.

Qiu Li believes that any art form comes from life, but any work of art is higher than life. The detailed appreciation of Gu Kaizhi's "vivid" and "wonderful thinking" in the Jin and Tang Dynasties, and Chen Yao's "teacher's mind" and "teacher's mind from outside, master's mind from inside" all mean that artists should use natural images to inject inner feelings into their creation.

She still remembers that when she was in the basic training of Art College of Harbin Normal University, the teacher asked her why she did not have melancholy and pain in the eyes of her broken arm Venus sketch. Qiu Li said that although Venus lost her arms, she loved life and should not lose her confidence in life.

In fact, Qiuli did not know that the statue of Venus was still intact when it was unearthed in Greece in 1820. Because of the struggle between Britain and France, the arms of the sculpture were broken in the scuffle. From then on, Venus became a goddess of broken arms. But at that time, Qiu Li felt vaguely that painting could express the author's happiness, anger and sorrow, and the painter's works should inject his own emotion. Later, she learned from many literary theories  In his own painting practice, he realized that Chinese painting stresses the integrity, and its category is mostly the dialectical relationship of interaction, mutual restriction and unity of opposites, such as form and spirit, emotion and reason, emptiness and reality, rigidity and softness, integrity and strangeness, and finally achieves the harmonious effect.

In addition, Qiu Li has also absorbed a lot of nutrition from the works of Chinese painters. Reading her lion and tiger works, we can see the coldness, strangeness and indulgence of Xu Qingteng and Badashan people from time to time. In the pictures of ladies, Hua Xinluo and Ren Bonian are elegant and astringent. In the landscape paintings, there are Wu Changshuo's and Qi Baishi's unsophisticated and rich brushwork. In the peony paintings, there are Li kuchan and Pan Tianshou's fresh and smart. Qiu Li believes that any art is inseparable from inheritance and innovation. 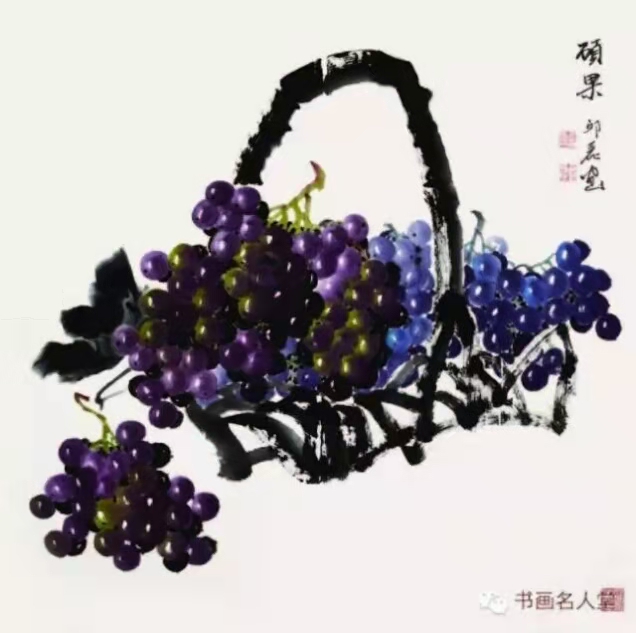 After learning from Wang Xuezhong, Wang Qi and Wang Yiyang, Qiu Li felt more and more enlightened. Under the guidance of Master Wang Xuezhong's "Strider theory", Qiu Li realized that if she wanted to become a master of art. It is necessary to cultivate and improve comprehensively from philosophy, aesthetics, calligraphy, literature, poetics and painting. Therefore, in addition to painting from life, she studies by reading books. In her bookcase, there are all kinds of classics and history books, aesthetic theories and famous paintings, even Nietzsche's philosophy of existence and Schopenhauer's philosophy of life.

When the author asked what is "Strider learning", Qiu Li explained that she understood that Strider learning is a comprehensive knowledge founded by Mr. Wang Xuezhong, which can integrate all kinds of Chinese arts。One painting, two combination, three monsters, four self, five images, six learning and seven arts.

"Two in one" refers to the unity of images. Calligraphy image is very important. Calligraphy is not only the art of brush and ink, but also the philosophical thought of calligraphers.

Mr. Wang Xuezhong, the "four self", put forward the idea of "three self and one super": discovering self, knowing self, anecdoting self and surpassing the times. As a calligrapher or painter, we should not stop at the expression of self, we must connect the "ego" with the "ego" which transcends the times, and with the country, the times and the nation.

"Six studies" include literature, aesthetics, literature and art, religion, philosophy, history and so on. The theoretical basis of the six studies is Sinology.

Qiu Li said that "Strider learning" is the purgatory road to cultivate Chinese artists. She may not be such a comprehensive and perfect artist all her life, but she has found a lifelong learning direction in Teacher Wang Xuezhong.

The most unforgettable thing for Qiu Li is that Wang Qi, the former executive vice president of China Artists Association, commented on his works after seeing them: bold conception and careful use of pen. Since then, this has become Qiu Li's creative principle, which enables her works to be free from vulgarity in terms of conception, modeling, brushwork, coloring and techniques, such as supporting, dyeing, dot, Cun, depiction, gouging, strangulation and so on.

In Wang Yiyang's place, Qiu Li learned the exploration spirit of "landscape can also have its own way". Her ability to draw the majestic power of the lion and tiger with the weakness of women is influenced by Wang Yiyang's idea of "acting against the trend".

Nowadays, Qiu Li's works are not only spread abroad as gifts for international exchanges, but also deeply loved and collected in China. At the end of 2013, the general office of Xinjiang production and Construction Corps issued the collection certificate with a thank-you note

Qiu Li: your Chinese painting BINGTUAN Huwei has been collected by our department. Your paintings, like the new Silk Road, extend the light of art to thousands of families in BINGTUAN: your little ink is like Tianshan snow water, moistening the hearts of soldiers with cultural nutrients; Your "one foot one Zhang" is more like a passionate book of war, which will encourage the vast number of soldiers to devote their lives to the great cause of the frontier and write loyalty.

We can see the role of Qiu Li's works in the process of spiritual civilization construction. After reading Qiu Li's works, I feel as follows:

To draw tiger and lion with brush and ink,

I'm even more happy when Zhaojun stands in the snow, 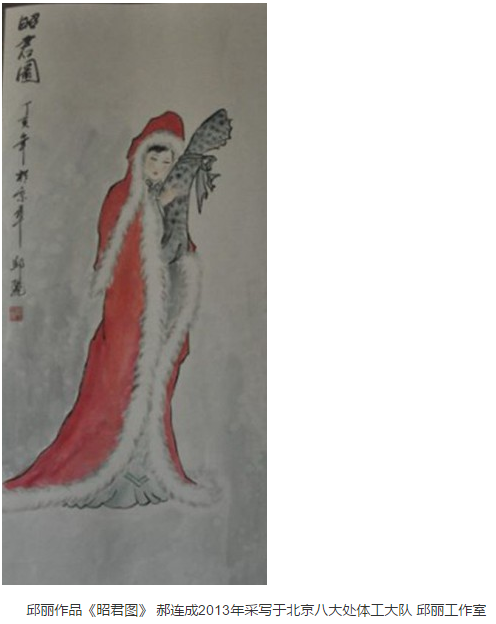